70th Year Anniversary in the RMFL 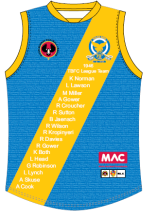 Football in Tailem Bend has a long and colourful history. The origin of the Tailem Bend Football Club can be traced back to the last decade of the nineteenth century, with newspaper references appearing as early as 1895.

The first official record of Australian Rules Football being played in Tailem Bend dates back to 1905, when on June 17, of that year a football match was played at East Wellington between Tailem Bend and Meningie. Tailem Bend won 8-10 to 1-2.

Tailem Bend was also represented by two sides Centrals (Red with a White Star) and Warriors (Black with a Gold Horizontal Stripe). It was in 1946 that the Tailem Bend Football Club “Eagles” joined the RMFL, taking on the colours of Royal Blue and Gold Sash. In 1947 the Club won its’ first Premiership.

Evolving from the Tailem Bend Centrals and Tailem Bend Warriors the club has had a roller coaster ride – bad times and good times. Devastating losses, emotional wins and of course, Glorious, Glorious Premierships.

Our proud Club has been built on the back of some wonderful players, teams and administrators that share a special bond with our community, and supporters near and far.

This year the Club will take the opportunity to thank all of the current and past players, supporters, volunteers and Sponsors for the support shown to us over the last 70 years. Without their ongoing support, commitment and passion for the TBFC the Club would not have been as successful as it has been.

The 70th year gives all those involved in the Club the opportunity to reflect on the great history of the Tailem Bend Football Club and the outstanding contribution it has made and continues to make to Australian Rules Football.

Those of us fortunate enough to be “custodians” of the Club at the moment have inherited an outstanding football Club of which we can all be proud to be associated with.

The Tailem Bend Football Club is a proud Club – proud of its heritage and proud of its contribution to the Tailem Bend community and the River Murray Football League. It will continue to build and strive for success and provide facilities for the young people of the community to take part in our great game.

Our Club vision, where we strive to be connected and have real ownership over our direction, is through the motto – “My Club, My Team, My Jumper”.

Specially designed Guernseys will be worn by the players for these events and will be auctioned after the game.

We would like all past players, supporters, associates, sponsors and anyone involved with the Club over the years to join us in our celebrations.

More information to follow, but if you are interested in attending the luncheon on the Sunday the Club can be contacted by emailing the tailembendfc@sanflcfl.com.au or phone  0428 261 854.

Once the siren has blown, get around the club and connect with the Tailem Bend Football Club community.

Keep updated with what is going on around the Club