The Tailem Bend Football Club were named for their continued promotion of road safety and contribution towards keeping the community safer.

The Tailem Bend Football Club was nominated by the Drug and Alcohol Foundation SA regional manager Mark Harris, for its ongoing campaign about regional road safety.

Since 2011, the club has run activities to promote road safety education through the Motor Accident Commission, even producing a television advert with a powerful message on road deaths.

The club also came together with the Imperial Football Club to host the Leahy/Kneebone Cup each year, which is in remembrance of two Murraylands girls who lost their lives on local roads.

This year the SA Metropolitan Fire Service was asked to present its powerful and graphic road awareness program to the community as ongoing education for players, parents and residents.

Promotion of road safety is done through the club’s website as well as Facebook posts and is discussed regularly at trainings and events.

The biggest impact the campaign has had on the community is the fact that children and teenagers are now talking to their parents about driver behaviour.

The Captain with the big heart will join an elite group of players to play 150 League games and will be suitably recognised at the TBFC presentation night on October 15.

He has worked his way through the juniors to become a tenacious on baller for the senior side. His class is evident by the fact that he has won the club’s senior Best and Fairest award 4 times and he has not finished yet. Playing during a period where on-field success has been limited he and his good mate Jarryd Linde have been the heart and soul of the footy Club. Leading by example, his ability to get to every contest and to help determine its outcome in some shape or form has made him an inspirational Captain.

Dylan, is a warrior and every time he crosses the white line he believes he is better than the other guy until he is proven wrong. He has finished most of his 150 games for Tailem feeling battered, bruised and looking very much the worse for wear. But, as he would say “that’s what is expected when you play for Tailem Bend”.

He has been in outstanding form again this season being one of the most reliable players at the Club and may it continue for another 150 games for the Eagles. 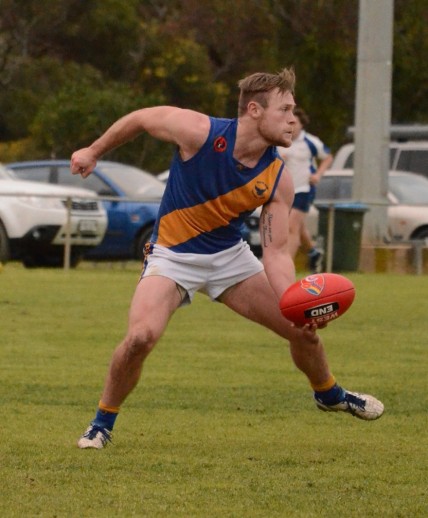 Two of the club’s favourite sons and most valuable contributors play milestone games of significance this weekend. Dylan Hogarth and Jarryd Linde run out for their 150th Senior games. Dylan has played 149 League and 1 Reserves game and Jarryd 144 & 6.

Both players started together in the “juniors” at the club and have been team mates for a long time now and whilst success has not been a regular occurrence they continue to give their all for the Club. Having watched a lot of footy at Tailem, I can confidently say, both would have been picked in any of the great sides!

They have been different types of players with Dylan being a midfielder winning 4 Best and Fairest, and captaining the side for the last 6 seasons while Jarryd spent most of his career as a back man with a reputation for being super reliable and being at his best when the “chips are down”

Both players have also been terrific off the ground and can be relied on to put their hand up when help is needed.

While being different types of players, they do share one aspect and have done so for many years and that is very simply, when the selectors sit down on a Thursday night, it is a given that the names of Hogarth and Linde are the first to be pencilled in.

Congratulations to two champions of the TBFC

Congratulations to Brad Kleinig who will play his 200th senior game for the Club this Saturday. Brad, has been a great player over the years and more importantly he is a good quality person to have around the Club.

Brad has faced adversity (losing an eye at an early age), but he has never let that impact his mindset. To play at all, let alone 200 Senior Games with the TBFC is truly a remarkable achievement. Well done Brad and well played!

Good luck from all at the Eagles’ mate! Have a great day and play well.

Keep updated with what is going on around the Club